What is Prediabetes and
How to Prevent it

What is prediabetes and its relationship to Type 2 diabetes?  Even though a wealth of information already exists about it, you may not know how awareness about pre diabetes can save lives and money. 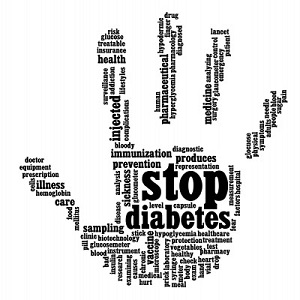 Let’s look at a few compelling reasons why you should care about the state of pre diabetes today.

First, diabetes ranks among the top 10 causes of death worldwide, as well as in the United States.

The top 10 countries with the highest diabetes rates include include the following number of people living with diabetes:

Here is the same set of numbers shown in a bar graph (keep in mind that 90 to 95 percent of all diabetes cases are Type 2). 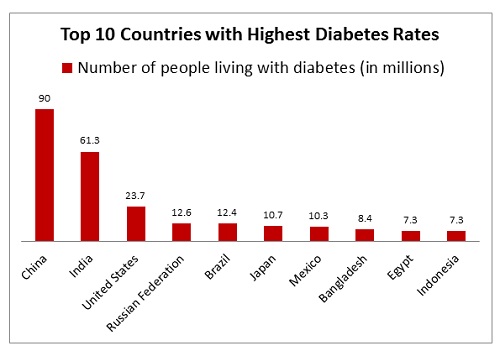 The IDF further estimates that, worldwide, an additional 280 million adults age 20 and older have impaired glucose tolerance, which for all intents and purposes, is a pre diabetic state.

Did you catch that?  A whopping 280 million people worldwide have pre diabetes, a preventable illness!

Considering that pre diabetes awareness is still relatively low, it’s fairly safe to say that the rise in pre diabetes (at least in the U.S.) is due to three main things:  an increase in overweight and obesity; diets that are low in fruits, vegetables, fiber and healthy fat; and a general lack of physical activity.

Now, let’s consider the cost of diabetes, using the United States as an example.

According to the American Diabetes Association 2012 study Economic Costs of Diabetes in the U.S., diabetes is raking in the dough.  The problem is that it’s emptying your pockets too!

Consider the bar graph below.

The total cost is the sum of direct medical costs (things like hospital care, doctor visits, prescriptions and medical supplies) plus the cost of lost productivity (what it costs the economy overall when people can’t work or participate fully in the workforce because they are sick, or worse, dead). 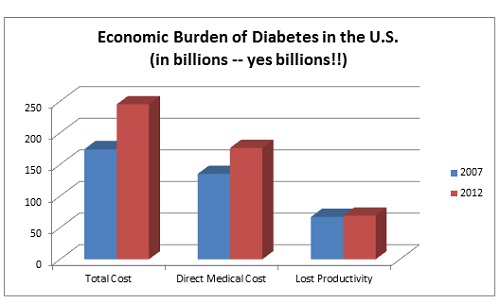 Whew!  That’s a lot!  Thanks for bearing with me.

I bring you these facts and figures not to bore you or make your head spin.  I simply want to give you a snapshot of where the world is with respect to pre diabetes and diabetes.

In short, things are getting worse.

So how does this apply to you in your search for extraordinary health?  Well, it’s pretty simple and it’s the reason I decided to build this website.  It’s easy to spout numbers.  But please remember that all of these statistics represent real people with real challenges who are spending real money, with no real time to waste.

I don’t want that to be you!

Pre diabetes is preventable, and so is Type 2 diabetes; they simply do not have to occur.  So let’s agree to start changing things right here and now.

If you’re still reading, then I know you’re serious about getting and staying healthy.  Congratulations!  I’ll be with you every step of the way.

I hope these pre diabetes facts have been helpful to you.  Ready for more?  Make sure to check out my 10 awesome awareness tips for pre diabetes.  There’s sure to be something in there that will catch your attention!

Return from What is Prediabetes to the Home Page